Skip to content
Previous Next
Bill Gates Net Worth, How Much Money Does Bill Gates Have?

Bill Gates Net Worth, How Much Money Does Bill Gates Have?

What is my Bill Gates net worth blog post going to say about how much money Bill Gates has in the bank? In this post, we’ll look at why and how Bill Gates has something like $131.1B at the time of me writing this blog post, that’s right, Bill Gates is sitting on $131,100,000,000.00, definitely a few more zeroes than I have in my bank account currently. Aside from the obvious reason for me writing this blog post, which is that the last blog post I did on Warren Buffett is now bringing me like hundreds of visitors per month within a couple of days and is already making me money, I have become absolutely obsessed lately with the fortunes of billionaires, how they accumulated them, and of whether or not it is actually possible for the common man to become a billionaire. This has been a fantasy of mine ever since I was a kid (don’t worry I know that’s delusional and don’t seriously think I’ll ever attain that status) however I think with a few million I could make myself “feel” like a little bit of a billionaire. And so, in today’s blog post, lets look into the life of Bill Gates, his early years, and how he made his miraculous fortune. For more details and information on all things money, read on or subscribe to our blog for additional details and information.

Bill Gates Net Worth Over the Years, and The Great Pilgrimage to Make Microsoft The Best 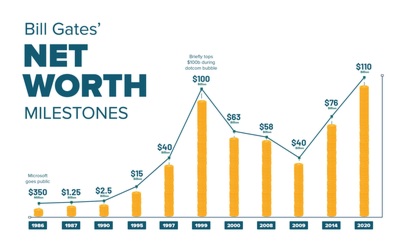 The Annual Income of Bill Gates, My Take on the Amount

Bill Gates reports on his income taxes each year just $1 in salary, which is something that a lot of billionaires do each year, including Mark Zuckerberg. Why do billionaires pay themselves $1? They want to work without paying themselves a direct salary so that they can look good to shareholders, but still be considered a compensated employee (though they are mainly compensated indirectly through stock appreciation) its something of an IRA tax loophole. With this being said, he’s had years where he’s lost $37,000,000,000.00, and years where he’s made twice that much money, crazy to think how much more money Bill could have had if he were to day trade his Microsoft stock (yes I know you can’t do that…just saying).

Final Thoughts on How Much Money Does Bill Gates Have, The Worth of Bill Gates Over the Years

The net worth of Bill Gates and of all of these Billionaires is absolutely astronomical. I think it was Ted Turner that said it was virtually impossible to spend more than like $350,000,000 in a lifetime, take this and multiply it by a thousand and that’s how much money these super billionaires are left with. Bill gates quite literally has about 20,000,000 times as much money as me, geez maybe life really isn’t fair. For more information on all things business and finance, read on or subscribe to our blog for additional details and information.