Skip to content
Previous Next
Does Andrew Tate Believe In Depression?

Does Andrew Tate Believe in Depression? 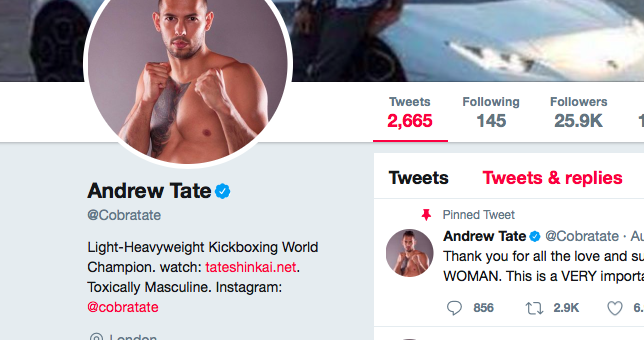 He says to say that depression is not real in order to make yourself stronger. He says to throw away your anti-depressants because they are likely not good for you over the long term, and to take control of your own brain, avoid the Matrix, and to break up bad thought patterns. I have been trying out his method, which is to not believe in depression, give yourself power over it, and to throw away any psychoactive stuff, so far so good!

Instead, he preaches that by climbing up the dominance hierarchy, by exercising, by getting your body into the best physical condition possible, and by working your butt off, that you can absolutely get ahead, and that this will subside your depression.

Why Does Andrew Tate Say That You Should Not Believe In Depression?

He acknowledges that obviously feeling depressed, or feeling psychologically worn down is no doubt real, however that by you saying it’s real, and that you are depressed, and that you need medication etc. that you give power to something that is making you weak. He’s on your side! He wants you to beat it and to come out of it and says that once you label something, you give it power. This is actually a nice psychological trick and a good strengthening state of mind that he is employing here, and I will definitely be adapting some of it for myself.

Some Andrew Tate Quotes on Depression

“If it makes me weak why I am believing in it? It may or many not be real, but I don’t believe in things that make me weak!”

He has a VERY valid point here. If you ask all of the people on ADHD medication or anti-depressants if they can get off of them, they will always tell you a resounding “no” and I think a lot of that is just nonsense and psychological blocks that need to be flushed out. The number of people that I see that take ADHD medication especially is extremely high, and the number that thinks that they cannot get off that stuff is astronomical! For instance, there is a girl in my office who said that she has been taking it for like 5 or 7 years and that once she graduated college, she wouldn’t need to take it anymore, since she would not need to study anymore. To each his own, fair enough.

Fast forward to 6 months after graduation, she is still taking them, and when I asked if she can go for a license exam the response was “no then I would have to double my dose” I’m very convinced that again, people install psychological blocks on themselves in cases like this. My dad said it perfectly when I once thought I had ADHD at like 16 years old “you’ve got the mind you’ve got” if it wonders, keep it in check. If it takes longer to learn, counteract that with aggressive discipline and push yourself to the limit. Even Jordan Peterson once said that the “literature on ADHD stimulants is very negative over the long term, meaning that people use it as a crutch and people do not propel themselves past it once they get past a point of no return on the stuff.”

Whether you think you can or you think you can’t you’re right. Thinking you can do something doesn’t necessarily mean you are going to pull it off every single time, but I generally feel that being optimistic, or what I like to call “realistically optimistic” is something that can absolutely help to propel you forward.

A quick example to help illustrate this, I am writing this blog post to publish on my website right now. I am making maybe $100 a month off this website currently, a good start but not nearly as far as I would like to go (I think this can easily make $3,000 to $5,000 per month with more content, and that we can catapult this into a sell of the website for nearly $250,000.) If I didn’t believe that I could pull this off, if I just said “there’s no point, what’s the point in writing all these posts” then I would not write any additional posts. Statistically, if 600 posts gets me to $100 a month right now, then getting to 5000 posts could get me to the $1,000 to $3,000 per month range of revenue almost absolutely. I have to believe those numbers though, otherwise I will never strive to hit them. I believe in hard work, and I bet on myself as my lottery of choice, whether or not that works is still up for grabs but I do think it is a good long term strategy.

Final Thoughts On Does Andrew Tate Believe In Depression

My last Andrew Tate quote to wrap up this blog post. Andrew Tate gives the analogy of believing in ghosts which I really like. When asked why he does not believe in depression, he says “if you take two people and put them in a hotel room. One believes in ghosts, one does not believe in ghosts. The one hears bumping and cracking at night and says “wind” goes back to sleep. The other one, is now TERRIFIED because of what is purely in their own mind.” Again he makes a valid point  here, don’t believe in anything that makes you weak, and instead strive to get stronger every single day. Hope you enjoyed reading, if you found this blog post valuable, be sure to subscribe or comment down below with your thoughts and opinions on the article!