Skip to content
Previous Next
How Much Money Did Andrew Tate Make Off Kickboxing?

How Much Money Did Andrew Tate Make Off Kickboxing? The Answer Might Surprise You

Exactly how much money did Andrew Tate make off kickboxing? In this blog post, I will strive to give you that number, as well as his overall fight stats, his wins and losses, how much his paychecks were while he was in Romania, and why fighting made him millions and millions of dollars, even if it directly only made him $100,000 or so in total. Andrew Tate now has a net worth north of $100,000,000 US Dollars, and if you haven’t heard of this guy yet, I’ll say that either you soon will or that your kids or someone that you know has heard of him! He has completely taken over the internet and his content is so masculine and entertaining that the number of blog articles written about him, the number of re-published Youtube content, and the amount of motivational videos and strong opinions, is into the millions and millions of clips right now. Literally this guy is all over the place, and big name heavy hitters like Patrick Bet Davis and his Valuetainment podcast, the fact that he is literally ALL over Linkedin, Facebook, Twitter, Youtube and the like, and even TikTok even though he was “banned” is surely saying something. His deal with Rumble looks to be in the $100,000,000 range, and he is not going to go hungry anytime soon. Now let’s use this blog post to explain to you how much money Tate made off of Kickboxing specifically, and of how he spiraled this into a 9 figure net worth. 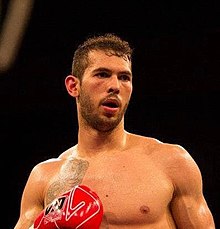 Other related people that I will cover on this blog include the following:

And other online influencers that have a lot of credibility and which inspire strength! I love watching those that are motivating and who inspire strength in others, and hope to continue blogging about them on this website.

How Much Money Did Andrew Tate Make Off Kickboxing? My Speculations Regarding His Fight Salaries

My guess would be that Andrew Tate made between $250,000 and $300,000 in total wages from fighting, though it could be as high as $1,000,000.00 in total earnings as a career Kickboxing world champion fighter. His brother Tristan Tate once said in a video that top fighters at that level when they win can get as much as $50,000 for a fight. Which isn’t bad, but when you think of the hours spent training, the food, the payment to your manager, the cost to join the gym, recovery, rent, you’re full time on this if you’re a champion so this is like your ONLY income. Yeah, fighters get paid terrible until they are right at like the top .1% or so. Even those in the UFC who are among the highest level of Mixed Martial Arts fighters, they’re walking around with $20,000 in their bank account if they are lucky, they are by no means rich that’s for sure.

How Much Tate Made Indirectly From Kickboxing As a World Champion, How He Spiraled This Into a Massive Youtube Empire Worth 9 Figures

Indirectly, one could argue that Tate has cleared as much as $200,000,000 in total earnings from Kickboxing. Honestly it is such a huge part of his personality, his character and his work ethic that he really would not be the same person without having gone through those experiences, and thus his personality and persona would not have taken off like he did. Indirectly, I would say that his lifetime earnings from Kickboxing are like $200,000,000 US Dollars.

Why Andrew Tate Is So Capturing To Listen To With Regards To His Rhetoric, A New Masculine Wave!

I think that his honesty, coupled with his conspiracy theories about the Matrix that you think might just be right (the dude is either paranoid, he is a really good actor, or he believes what he’s saying, or worse yet what’s he’s saying is true. Any outcome there is scary). He definitely is positive overall with much of what he talks about being around making the individual stronger, especially as directed towards men, who as a whole definitely are in much more need of a pick me up and resonate much more with what he is saying. He is almost like a younger, more aggressive Jordan Peterson. Picture Jordan Peterson if he was a 35 year old kickboxer and if you took all of Jordan’s pauses and filters off, then swap his academic knowledge of evil for street knowledge of it, and you have Andrew Tate. Add weight lifting in there too, lots of weight lifting, and you have a young doppelganger of Jordan Peterson, functionally at least.

Final Thoughts On How Much Money Did Andrew Tate Make Off Kickboxing? My Guess Would Be Around $300,000 In Total Lifetime Earnings Directly

Kickboxing earnings? I am going to guess that he has 6 Title defenses at $50,000 a pop, that is $300,000 in earnings. Given he has had 50 fights in total let’s average the rest out to around $10K a pop (you get like zip when you are first starting out so I think that that is fairly close to an accurate number) so add another $500,000 to that. Total fight earnings as a Kickboxer for Andrew Tate was directly at $800,000. Indirect earnings from his brand personality and internet content empire, and net worth goes to $200,000,000 US Dollars. Not too shabby for a fighter from Europe. If you enjoyed, read on for additional business content, and be sure to subscribe or send us an email for our $1.00 SEO consulting introduction call!