Skip to content
Previous Next
Limitless Movie Review, A Great Metaphor for Discipline

Limitless Movie Review, A Great Metaphor for Imposing Discipline in Your Personal Life

My Limitless movie review will walk through what I really like about the movie, some aspects of the movie that I think are metaphors for what happens once you impose discipline on your personal life, and of why I have probably seen this movie at least 100 times and why it is probably my favorite movie in the world. And yes, I know it’s kind of a silly, 10 year old Bradley Cooper movie, and yes, I still like the movie even though it is now 10 years later, and even though I’m much older now. I even watched part of this film yesterday and was literally laughing at certain parts of the film that I thought were a little ridiculous that I never caught when I was say 17 years old watching the film. And so, without further ado, here is my Limitless movie review and plot summary, and here’s why I think Limitless was a really great movie. For more information, subscribe to our blog for more details, and be sure to subscribe to keep reading below!

So, the film starts out showing Eddie Morra, about to be evicted from his apartment, broke, and considering moving back in with his parents, probably around age 33-35, struggling, depressed, an alcoholic, and being 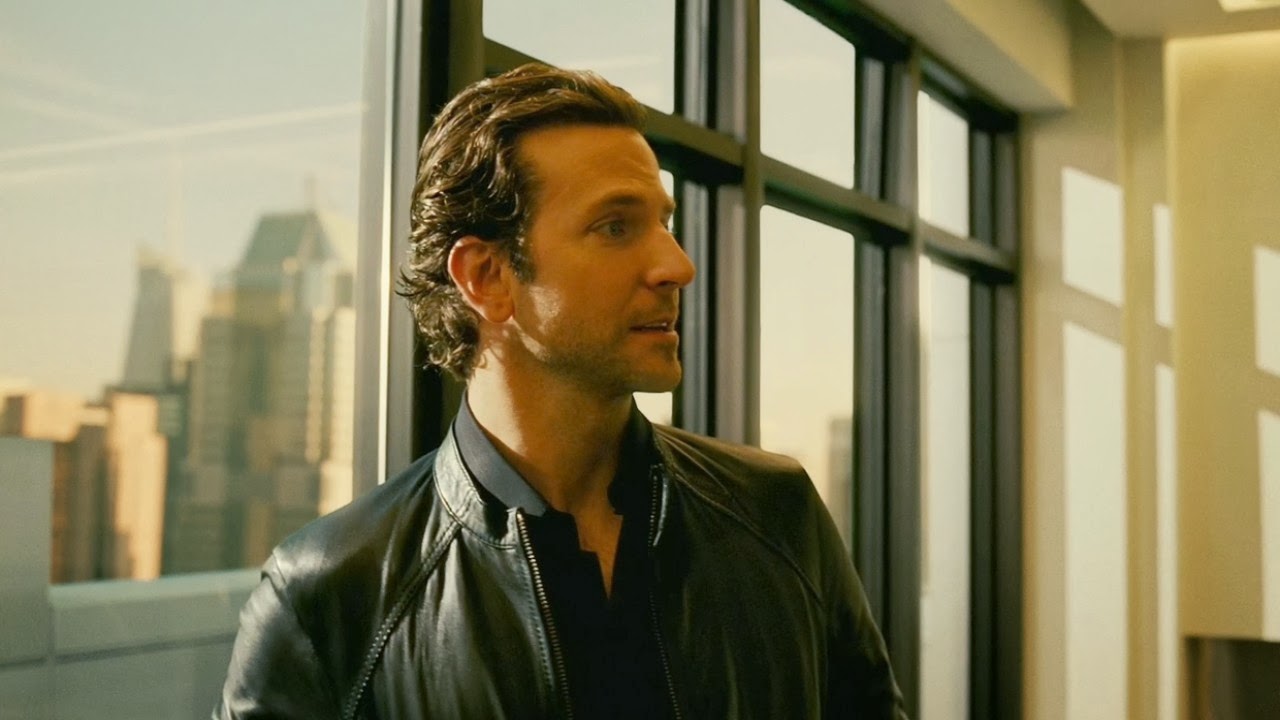 completely screwed overall. He meets his ex brother in law who gives him this new super powered food that supposedly allows him to access “100% of his brain.” Which is kind of an over-simplification on neuroscience from the eyes of the writers, but so be it, it works with the film. So, basically how I think the pill effects him, is that it takes away all of his stupid, self destructive habits (the downward spiral) and replaces them with only positive habits that can spiral him up the dominance hierarchy. It also gives him a ridiculous, genius level IQ, photographic memory, perfect thoughts and a good decision making process, makes him want to be more clean cut and basically gives him perfect social skills. For a supplement to do one of those things, like say caffeine improving analytical performance, or alcohol improving social performance, is one thing, but for something to do all of them at once and at a really high level, would be something miraculous indeed. Anyhow, let’s move on to the scenes within the movie.

Okay so he takes this brain food, and all of a sudden its like the lights turn on, he is confident, able to talk his way or think his way out of just about any situation (like I said, gives him perfect skills in all areas so that he can spiral himself up the dominance hierarchy in a perfect stride basically without taking on any losses at all). The pill kicks in right around when he is talking with his landlords hot Asian wife, who is grilling him for not having the rent money. He soon finds out she’s in law school, is able to write a perfect legal paper for her, and ends up sleeping with her. From here, he heads back to his apartment in shock over what this thing can do. He cleans his entire apartment, which is such a pig sty that its amazing this guy had a girlfriend at all, I mean I’ve lived with roommates before but come on you can’t keep a single apartment semi-clean while you have a girlfriend? So now he cleans the place completely spotless in a matter of hours, and starts looking out the window with his newfound clarity of thought. He soon remembers his book deal that is on the table, realizing that he needs money. He writes all night, cranking out a 90 pager that baffles his publicist (foreshadowing to this earlier in the movie, right before he gets the pill, Eddie says “don’t worry I’m just about to hit a 90 pager.”) From here, he starts on his book, and this scene has actually done so much as far as motivating me to be a really good writer and write tons of blog posts etc. that it is uncanny. Eddie sits down at his computer, now in a clean room, symbolizing that his life is now more in order and his thoughts are no longer cluttered, and he cranks out that 90 pager he had discussed the day before. He says the next morning, he searched his brain for brilliance, and it was gone, in short, he was back, but “something remained.” The novel he had just written.

He puts it on his publishers desk, and soon after he is getting a call about how good it is. He goes to Verns place to get another one, finds him incapacitated, calls the police, and ends up with a massive stash of these, probably about a years supply of daily doses. From here, the show is on, he gets a haircut, uses his new money and book advance and puts himself together, finishes his book in four days, picks up girls, goes out and socializes, meeting new people including a portfolio manager who gives him his card. Eddie has an idea to start exploring the finance game as he thinks that this pill can take him further than he can imagine, no books or writing, but money and power. He starts playing the stock market, which shoots us into a new world of this movie.

This is another scene that really got me interested in the world of finance and investments, and in fact I started reading about the stock market obsessively as soon as I got home from this. Eddie gets Wall Street Journal reports ready to go, 10K’s printed, investment novels ready to go, and turns $800 into $2800 in one day. Next day he turns $2800 into $10,300. He says it was too slow, saying he needs more capital. He gets a $100,000 loan from a bookie, and takes it to a day trading firm (not a thing but I’ll let that one pass) where you can leverage, as he says 2.5x your cash (you can leverage like 50-100x your cash with options and different margin accounts, but I’ll let that one go too.) Also as a side note, from someone that works in the field of banking, seriously good luck taking $100,000 in cash to a brokerage firm and getting it deposited no questions asked, I actually laugh at this scene now that I think about it, most of those kinds of firms don’t even take cash deposits>>but anyways moving on.

He trades it and within a week his brokerage account has $2,300,000.00 in it, word quickly gets out. He gets a meeting with a hot shot hedge fund executive, Carl Van Loon, and soon becomes his associate after he sees what he can do in the stock market, eventually suspecting that he is on the super food. So he basically starts working as an advisor to Ray Dalio, 2 months into taking his little super food excursion. He keeps working for him at a fat salary hoping to close this deal that will make him $40,000,000.00, not too shabby for just a few months of work. Soon the deal blows up because the guy on the other side is also dying from NZT, but Eddie still has like $3,000,000.00 so he’s fine, however someone steals his stash of super food, sending him into punishing withdrawal. He gets it back, makes his own way again with the pill, and in a years time he is back with his girlfriend running for the United States Senate.

My Final Verdict on Limitless, My Thoughts

I like how fast they have him rise up the dominance hierarchy and go from zero to hero, although it is VERY unrealistic even with that type of skill. It takes more than 12 months to organize a senate campaign and even if you are the most charismatic guy in the world, you’d still be a long shot candidate against big name players, and they’d likely expose his antics in the shadows sooner rather than later as soon as he ran a campaign. But in short, it is still a very good movie and I noticed that after you watch it you definitely want to become a lot more disciplined, whole as a person, and it makes you want to do everything possible to move up, rather than allowing atrophy to take over and spiral you downward. What do you think of the movie Limitless?  Subscribe and comment to let us know.