Skip to content
Previous Next
Louis Wants Mike As His Associate

Louis Wants Mike As His Associate, An Absolutely Heartbreaking Scene From Suits

And now Louis wants Mike as his associate, let’s talk about it. Fast Forward to Season 3 of Suits, we have just made it out of the Ava Hessington trail and Ava has gotten off her trial as a client. Given what the firm put her through however, with their own lawyers being involved in the ruse, not to mention barely getting her out of it in the end, and her own partner having to come forth and testify, Ava fired us as a client. Understandable given what she had went through, she paid her bill to get through the trial and then moved on, not sure who would not have done the same thing in this instance.

Consider the Deposition With Ava Hessington at the beginning of the Season, Ava, on trial for bribes, gets deposed by her own lawyers, a trial run in order to get her ready for what might happen in real court. The deposition went something like this:

Harvey, trying to rattle Ava “When you bribed these people how much money did you think you were going to make”

Mike “Since Bribery is how it works over there right?”

Ava: “Very well, we finally get down to it. I’ll have you know that I did not arrange that bribe, but someone in my company probably did. Want my proof? We paid $100,000,000 more than any other company, just so that we could re-locate any family who lost anything. Family, jobs, homes, livestock, we paid back every single penny”

The above conversation basically leads Harvey and Mike to realizing that Ava did not do it, and then listening to the deposition convinces Louis Litt of the same thing.

Fast forward to them winning the trial for Ava, but nearly losing it because a lawyer from their own firm was heavily involved in the crime she was being accused of, and what we have is a very upset Ava, that eventually fires them as a client. 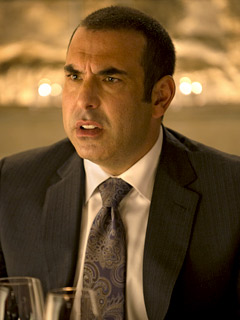 Moving beyond this, what we see is Mike and Harvey teaming up to try and help stop a merger. They have something in the works between the two of them, along with the help of Scottie, so that they can take down Jessica. Jessica would eventually blackmail a very young and inexperienced Mike Ross into getting rid of the information, and as it happened, they both lost the case. Harvey found out it was due to Mike’s betrayal, and decided to cut him off.

Louis Wants Mike As His Associate, How Did We Get Here In The First Place?

In terms of skill, Mike was definitely the best associate in the firm, no doubt about it. When Louis Litt saw that Mike was now in the Associate pool due to the falling out, and also that he nearly catches Mike Ross resigning by the copy machine, he takes him on, courting him to be his associate. Mike eventually says yes, however Harvey comes to his senses at the last minute and takes him back.

Now given Mike’s situation I might have told Harvey to shove it. I also might have just told the both of them to get bent and instead would have pivoted career fields, as Mike was perpetually breaking the law every single day that he was in there. But eventually, probably more to keep the show alive, Mike went back to working for Harvey, Louis threw a way a very nice chocolate cake that he had definitely spent some work on that said “welcome to team Litt” before having to throw it in the trash can after seeing them high fiving, and had to walk away in shame.

Final Thoughts On Louis Wants Mike As His Associate, A Very Cool Scene

This was a very heartfelt scene, and what we see is Louis Litt getting heart broken once again. He would later go on to win the entire thing, and become managing partner in the end, also getting Katrina back as his trusted confidant and Senior Partner, someone who really should have been his associate from the start. What did you think of this episode of Suits? Leave a comment down below and let us know.